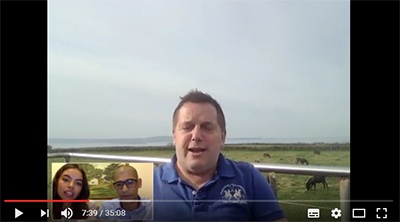 In this fascinating video, Kevin Green tells the story of how he went from being homeless at 19 to become the largest owner of residential property in the United Kingdom. He is a self made millionaire who owns his own bank and several other businesses. He is also a keynote speaker making speeches all around the world.

Kevin normally settles for around four hours sleep a day. When asked where he gets his energy from he stated that when you are excited about something then the energy naturally comes. Being passionate about what he does was a key driver for him and has kept him going over the years in his pursuit of success.

The interviewers asked Kevin what he would do if he was 19 again but had all of the wealth of experience that he has today. His answer was to target the people who are where he wants to be and ask them lots of questions about what they had done and how they had become successful. He said that you should never be afraid to target successful people. The worst they can say is “no” and at best they will provide you with fantastic tips and advice.

He talked a lot about having the determination to succeed. He explained that because he had experienced a lot of pain in his life he was totally driven to achieve success. He said that fear often holds people back – the fear of the unknown. He chose Sir Richard Branson as his mentor. He said that if you do not overcome fear and move forward you will regret it in later life. It is better to attempt something and fail rather than do nothing.

Results build self belief and confidence. He was shy as a young man but his confidence grew as he achieved more and more results. He said that he had failed many times in the past but never lost his passion and determination to be a successful property investor.  This video lasts for around 30 minutes but you will find it very inspiring.

Here is the video.